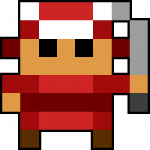 The Samurai recently appeared in Build X.28. The Samurai is the first new class introduced in nearly six years and the first new heavy armor class since the Paladin was first introduced in January, 2010. The Samurai is a combination of sword class tankiness and the attack range of a Ninja, while sacrificing weapon damage-per-second compared to those classes. As a katana class that wears heavy armor as opposed to leather, the Samurai marks the first time that any type of weapon was paired with a second armor type.

The most exceptional stat that the Samurai possesses is an attack cap of 75. This allows them to do considerable damage with each individual shot. Not only does it have above average stats, it's ability, the Wakizashi(a traditional Japaense sword) allows the Samurai to perform perpendicular slashes that intersect with the crosshair of up to 4.4 titles. This ability is not only unique, but also overpowered in some sense.

Unlocking it requires attaining level 20 with both Ninja and Knight. The Samurai relies on consistency and skill, using katanas and the waki's to deal formidable amounts of damage in a short period of time.