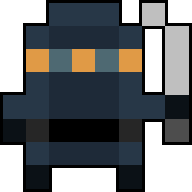 The Ninja first appeared in Build 124.0. He is currently the only class to use the Katana and the only class with an ability with two separate functions, speed and damage, packed into his special item - the Shuriken.

The Katana’s attack range is shorter than that of a dagger, effectively making the Ninja a melee class.

Unlocking it requires attaining level 20 with both Rogue and Warrior. The ninja relies on speed and skill, using katanas and ninja stars to deal formidable amounts of damage.