THIS IS LOST HALLS V1

The Lost Halls is currently the end game dungeon, and will most likely keep that title for a while. There are three possible bosses you may fight in this dungeon: the Marble Colossus, the Cultists, and the Void Entity. This dungeon drops an exclusive paladin, necromancer, and trickster set, which are seeked by many players due to their stats and rarity. Teleportation is disabled in this dungeon.

The key to access The Lost Halls may be purchased in the Nexus for 200 gold. 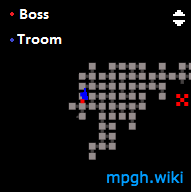 The Marble Colossus is the main boss in the Lost Halls. It's location is not a quest, so people in the dungeon must clear and hope for the best. This boss has 15 phases before it dies.

These are the five cultists of The Cultist Hideout. Each have three phases.

Balaam will either shoot radial bursts of Green Shots that inflict darkness and return to him, spreads of Blue Shots that pierce armor, or shoot 3-directional Red Shots that are slow but deal enormous damage and pierce players. Once enough damage is done, he splits into three that each do one of the mentioned phases.

The Void Entity is arguably one of the hardest bosses to complete without a group. Every shot that the boss shoots does 150 damage or more. This boss consists of eight phases.

Commander of the Crusade

Sword of the Colossus

Bow of the Void

Quiver of the Shadows

Brain of the Golem