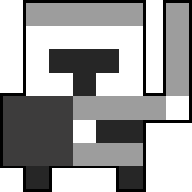 Originally, the Knight was implemented in the game to be the most resilient class, with incredibly high Defense and low Speed, his shield also did nothing for him but provide a Defense boost.

However, he was eventually given a slight nerf on his Defense stat, and the shield was given an actual effect and made exclusive to the Knight.

Today, the Knight is commonly thought of as one of the most powerful classes in the game.

The knight fights at close range, wears heavy armor, and uses his shield to stun enemies.