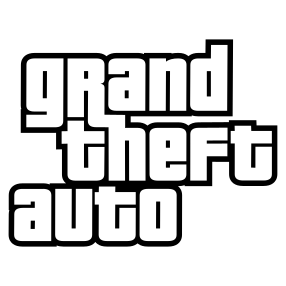 Grand Theft Auto (GTA) is an Action-adventure game video game series created by Rockstar Games. The name of the series references the term used in the US for grand theft auto.

Most games in the series are set in fictional locales modelled on cities, usually either Vice City, Liberty City or San Andreas, which are replacements for Miami, New York City and California. The first game enclosed three cities, while following titles tend to point up a single setting. The gameplay focuses on an open world where the is able player to choose missions to complete an overall story and also prepossessing in side activities, all consisting of Racing game, third-person shooter, Action-adventure, occasional role-playing and Stealth game elements. The series focuses around many different protagonists who attempt to get a high rank in the criminal underworld scene, although their motives for doing so vary in each games

4. Grand Theft Auto 2 (1999) - Featured an improved graphics engine and a different style of gameplay. Available for the PlayStation, PC, Dreamcast, and Game Boy Color. The game is set in Anywhere City. GTA 2 is the only GTA game to have a digit in the title instead of a Roman Numeral. It is the only game to have a T rating. 3D Universe The 3D Universe featured the first blockbuster GTA title, Grand Theft Auto III, and introduced a 3D game world and third-person perspective. The entire era contains interlocking storylines, and many characters appear across multiple games. Notably, games in this era were not released in chronological order, with the first game released being the last chronologically, and the last game released being the first chronologically.

5. Grand Theft Auto III (2001) - Set in fictional Liberty City, based upon the real life New York City. Multiplayer mode was removed, but other areas were much improved, namely the graphics, voice acting, storyline with non-linear gameplay. 6. Grand Theft Auto: Vice City (2002) - Set in Vice City, a city based on real life Miami. This sequel to GTA III is technically a prequel (set in 1986) to the game, and to GTA San Andreas, which was released after GTA Vice City.

7. Grand Theft Auto Advance (2004) - What was originally supposed to be a stripped-down port of GTA III for the Game Boy Advance turned out to be a completely original game, set a year before GTA III, in a slightly altered Liberty City. This game returned players to the "top down" perspective graphically, although the setting was still the 3D Universe rendition of the city.

8. Grand Theft Auto: San Andreas (2004) - Set in the state of San Andreas, GTA San Andreas featured three cities, Los Santos, San Fierro and Las Venturas, based on Los Angeles, San Francisco and Las Vegas respectively. The game is set in 1992, making it a sequel to GTA Vice City, and prequel to GTA III. The game featured many customisation options for both the player and vehicles and a limited multiplayer mode exclusive to the PS2 version. See also: The Introduction

9. Grand Theft Auto: Liberty City Stories (2005) - A prequel to GTA III set in Liberty City in 1998. Originally for the PlayStation Portable, a PS2 port was released in June 2006 without multiplayer.

10. Grand Theft Auto: Vice City Stories (2006) - Vice City Stories is set in Vice City in 1984, two years before the original GTA Vice City. It was released in October 2006 for the PSP. A PS2 port was released later without multiplayer in March 2007. It is the final game of the 3D Universe. HD Universe The HD Universe featured Rockstar's RAGE engine, also used in Rockstar Games Presents Table Tennis. The gameplay did not change dramatically from the successful 3D Universe formula. This era features:

12. The Lost and Damned (2009) - A standalone downloadable episode released in February 2009 for the Xbox 360. TLAD is set in the same Liberty City as GTA IV, with events and characters overlapping with GTA IV. The protagonist is Johnny Klebitz, vice-president of The Lost MC. It was also available as part of the Grand Theft Auto: Episodes From Liberty City disc released on PC (Games for Windows - LIVE) and PlayStation 3 in April 2010, which includes The Ballad of Gay Tony.

13. The Ballad of Gay Tony (2009) - A second standalone episode for GTA IV released in October 2009, the last DLC for GTA IV. The protagonist is Luis Lopez, a part-time hoodlum and full-time assistant to legendary nightclub impresario "Gay" Tony Prince. It was released on PC (Games for Windows - LIVE) and PlayStation 3 in April 2010 along with the Episodes From Liberty City combination disc with The Lost and Damned. Note: All three GTA IV games were later combined into Grand Theft Auto IV: The Complete Edition and from April 2020, following the demise of Games For Windows Live, this is the only version available to purchase new for PC. Owners of physical or digital copies of any of the three standalone games can upgrade to The Complete Edition for free with patch 1.0.8, however this removes the multiplayer component and several radio stations are significantly changed due to the expiry of music licenses.

14. Grand Theft Auto: Chinatown Wars (2009) - Set in 2009 and focusing on the Liberty City Triads. The protagonist, Huang Lee is the son of a murdered Triad boss who comes to Liberty City. It is set in the same Liberty City as GTA IV (excluding Alderney, but scaled down for the Nintendo DS). PSP, iPhone, Android and Kindle Fire ports were released later, the PSP version including new missions and characters, and all new versions including new radio stations and improved graphics.

15. Grand Theft Auto V (2013) - Set in 2013 in a redesigned Los Santos. According to Rockstar, Grand Theft Auto V is their biggest open world game to date. The game concentrates on "the pursuit of the almighty dollar". For the first time since the 2D Universe, the game features more than one protagonist, with three playable protagonists, Michael De Santa, Franklin Clinton, and Trevor Philips.

16. Grand Theft Auto Online (2013) - It is considered by Rockstar to be the series' first dedicated multiplayer title. The player assumes the role of an online protagonist, with the focus of the game being heavily centered on money. The game was originally set shortly before the events of Grand Theft Auto V in 2013. However, as the game released updates, the game's setting advanced in real-life timing, with character later mentioning past events that took place in GTA V. Grand Theft Auto Online was released on October 1, 2013, 14 days after Grand Theft Auto V, and requires GTA V to be installed to play.